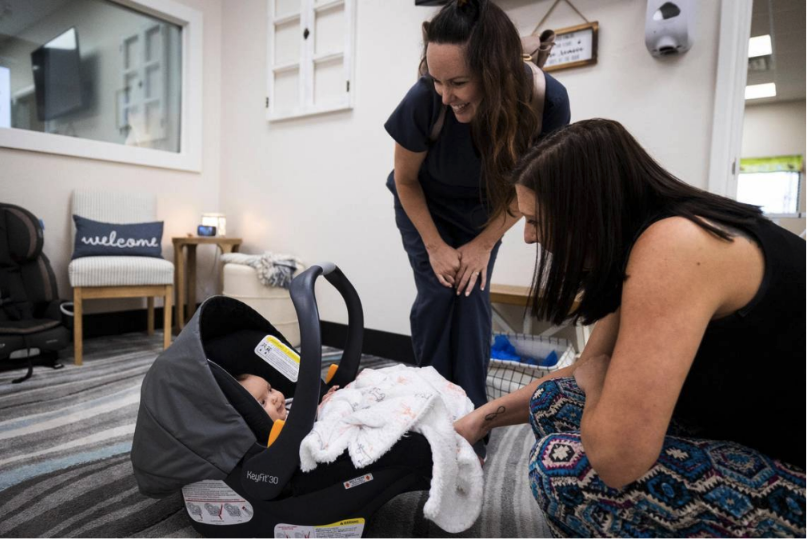 When the pandemic sent children home from school in March of 2020, Vivian Allen was among dozens of parents at her Fort Worth manufacturing company left scrambling to find options for child care and schooling, virtually overnight. As the support director for SigmaPro, she was also responsible for helping all of the other parents, who couldn’t work from home like many at the start of the COVID-19 pandemic.

So she, and the rest of the company, got creative. “We turned one of our conference rooms into an on-site school,” she said. “Everybody could bring their kids (and) we made big cubbies out of cardboard boxes that we ship our stuff in and just cut them up.”

One of the engineer’s daughters was hired as a tutor, and children were able to decorate their spaces to make them their own. The overnight school gave parents a sense of security during an uncertain time. But after a semester, schools opened back up and parents of young children were still struggling to find quality, affordable child care.

“We knew the need was there for a long time,” Allen said. So the small, family-owned company of less than 250 employees decided to make it official. “We made the decision over family dinner,” Allen recalled. “We were going to turn a new space into a big, fancy conference room where we could take clients, with TVs and everything.”

But the pandemic-era school and conversations with coworkers revealed a more pressing need to be met. “It was actually pretty simple once we had the space and decided to do so,” Allen said. “We just gutted the whole thing, rebuilt the insides and we hired a director and she took care of all the licensing stuff.”

EMPLOYEES FIND COMFORT IN HAVING KIDS CLOSE BY DURING WORK

When Carissa Rubio started looking for day care for her young son after a change to her parents’ schedule meant they couldn’t provide care, she was nervous. “We didn’t want him to be around too many children, or too far away from where we could get to him,” she said. “We browsed a little bit but they were expensive and not close by.”
Rubio, who works as a molding scheduler for SigmaPro, said she was running out of options.

Then she attended an open house for the company’s day care, known at the time as SigmaKids. “It was just kind of really exciting to know that there was an option for him to be on site with us at a day care that had an open-door policy,” she said. “So we could go in and check on him at any time.” Allen said she walked the floor of the manufacturing plant before the day care officially opened and gauged interest, with about 10 parents initially jumping at the opportunity.

Andrew Mikel, another SigmaPro employee, said that he struggled to find adequate child care when he started to look before his daughter was born. “I remember walking in and they had like a newborn section at this other day care,” he said. “And it had the cribs double stacked, they had like a plexiglass in front of them and it looked like you were walking into a PetSmart.” So instead he coordinated a careful balance of alternating shifts with his wife, a nurse, and dropped his daughter, Emree, off with his parents in the meantime.

“When they opened SigmaKids, it was life changing,” he said. “It was just like walking into a different version of home.” SigmaPro, which used a nonprofit created to help employees run the child care, is just one company in a growing trend of offering day care as a benefit to retain and attract working parents — many of whom left the workforce during the pandemic.

While the concept of an on-site child care was born to serve employees who worked at SigmaPro, as the company built capacity, it opened the center, now called Fellowship of the Parks, to the general public. Ashlee Hussen, a physical therapist, enrolled her daughter at just 3 months of age after finding out about the program through Facebook. “When I found out it was the on-site daycare, I thought that was amazing because I think that would even help other moms getting back to work knowing that their company provides child care,” she said. “But with them opening up more to the community, for us that don’t work at that company we were able to have the opportunity to put our kids there.”

Mikel, the SigmaPro employee, said that he has also been able to network with other manufacturing parents in the area through the child care. “It really kind of brought the businesses around here together,” he said. “I’ve met and interviewed some people that have their kids go to day care And so it’s kind of organically growing a network.” While the direct area around the manufacturing company is not considered a child care desert, the ZIP codes surrounding it have a dearth of quality child care, according to a recent analysis by the advocacy organization Children At Risk.

MORE COMPANIES ARE HELPING THEIR EMPLOYEES WITH CHILD CARE

The reason so many companies have signed on is compelling. Recent reports have highlighted the massive economic losses associated with parents leaving the workforce, or missing time in order to deal with child care. According to one report from the Chamber of Commerce Foundation, 74% of workers surveyed, representing various geographic areas, income levels and racial and ethnic backgrounds, said they missed work at least once in the last three months. Those who missed work did so for an estimated average of 15 days over the last year.

The parents in these scenarios lost wages for time missed, and the employer experiences a loss in productivity as well as the financial cost of paying overtime to other workers or even hiring and paying temporary workers to make up for the missed work. Researchers say that makes up an estimated $4.72 billion in lost economic potential in Texas per year. In more extreme cases, parents have to leave their jobs altogether to take care of their children full time. “As employees leave the workforce, employers face significant costs to replace them,” the report says, adding that replacing an employee can cost as much as one- fifth of an employee’s yearly salary, leading researchers to estimate that the turnover cost to employers in Texas is $2.87 billion annually.

With people working less and leaving employment, they also tend to spend less money, according to the report, leading to a total decrease in Texas sales and excise taxes of $1.8 billion annually due to employee turnover and absenteeism. Jessica Chang, the CEO of WeeCare, said that businesses providing child care benefits is essential to economic growth and recovery, especially after proposed legislation to bolster the early learning workforce stalled. “Someone has to come into this party and really be able to stabilize the child care industry,” Chang said. “And that has to be employers.” “They are asking employees to come to work or be able to balance the family at home — well, then the expectation is that employers will start helping out,” she added. The way companies support their working parents doesn’t always look the same, Chang said. “If you just offer an on-site child care that really limits the ability for really that equitable solution when it comes to child care for all employees at home,” she said. “So we actually offer an alternative where we can actually create child care programs for them, specifically in dedicated licensed home day cares, but they can be dedicated across different ZIP codes and across different areas based on where employees actually need care.” “So instead of thinking about this and saying something that is one location at your headquarters, you could literally have 20 locations based on what actual demand is.”

Allen recently spoke about her experience in setting up on-site child care during a pandemic at the National Summit for the Best Place for Working Parents, an initiative that started in Fort Worth with the goal of helping employers better serve their parent employees.

Sara Redington, director of strategy & communications for The Miles Foundation, highlighted the particular need and success of the program in Fort Worth. “Fort Worth actually has the second highest share of families with children in the U.S.,” she said. “We also know that only 27% of families have the father as the sole breadwinner and 83% of millennials are looking to switch jobs to others with better family-friendly policies.” That need existed before the pandemic closed child care centers and caused a mass exodus of employees who have yet to fully come back. “The reality is that when school resumed in fall 2021, 80% of the 1.1 million people that left the workforce were women,” Redington said. “We’re today at a 33-year low in female workforce participation.”

The Best Place for Working Parents, which provides a designation to companies that take a short survey gauging a number of benefits for their employees including on-site child care or child care assistance, is seeing record participation. Sadie Funk, the national director for Best Place for Working Parents, said that the trend is spreading across many industries. “We’ve seen small, mid, large companies really step forward and put in on-site child care, and as a result, we’re able to connect with those people, those businesses person to person and learn about the savings they’re putting in place,” she said.

Part of the reason companies aren’t offering the benefit is they aren’t aware of the options, Chang said.“It’s still relatively new for most employers. From our own insights, eight out of 10 employers we speak to don’t even know what a child care benefit program is,” she said. “We want to continue to discuss, to educate eight out of those 10 employers to actually understand that these are options that are available to them, that they can choose to do to help them with retention and help them with recruitment.” Allen agrees. “I absolutely believe that the only reason a lot of companies haven’t done this is that the decision makers don’t feel the need,” she said. “The only reason they aren’t taking the medicine is because they aren’t feeling the pain. Allen said that at the end of the day, her experience shows that helping employees with child care is possible, necessary and worth it. “I can’t force all the CEOs to adopt tiny babies and just have to be up all night and worry about losing their jobs,” she said. “But the people who do feel the need is the young parents. They’ve been asking how do we convince the people of power? Well, by making a louder voice, being together, and by becoming the people of power.”